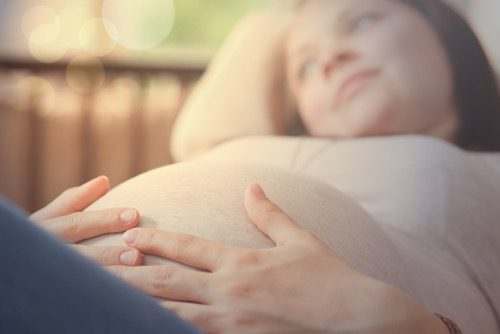 Not getting a lot of sleep while you’re pregnant? You’re not alone — many moms-to-be struggle with getting enough sleep when they’re expecting.

Trips to the bathroom, heartburn, hot flashes and just having a hard time getting comfortable can disrupt your sleep while you’re pregnant, and all during a time when it’s important that you get enough rest (you need all the rest you can get before those sleepless newborn nights!).

When you stop breathing, your oxygen levels can take a dangerous dip, causing health issues for both you and your baby. If you suspect that you have obstructive sleep apnea or have been diagnosed with the sleep breathing disorder, you should discuss treatment with your physician as soon as possible.

What Is Obstructive Sleep Apnea?

Sleep apnea is a chronic condition in which the muscles of the throat collapse into the upper airway, or the upper airway becomes blocked during sleep by your tongue. When this happens, airflow into the lungs is interrupted, causing periods of no breathing, called apneas, or shallow, rapid breathing known as hypopneas.

In most cases, sleep apnea causes loud snoring, but not always. When breathing stops, most people also gasp, snort or choke to start breathing again.

Many people living with obstructive sleep apnea do not know they have the condition, as they do not fully awaken after a period of apnea or hypopnea. While they don’t remember or fully wake up, they often see the condition’s signs the next day.

What Are the Signs of Obstructive Sleep Apnea During Pregnancy?

Seep apnea generally won’t wake you up completely, so your partner may tell you you’re snoring loudly or gasping for breath throughout the night.

Other signs of obstructive sleep apnea while pregnant include daytime sleepiness or feeling fatigued no matter how much sleep you get.

Many pregnant women living with obstructive sleep apnea report falling asleep while reading, watching TV, sitting and working at the computer, or even in traffic, which is incredibly dangerous. Some researchers have shown that individuals with obstructive sleep apnea have more significant risks of being in a car accident than their peers without the sleep breathing disorder.

Some pregnant women with obstructive sleep apnea also report feeling irritable, forgetful or impatient. So, it may not just be the hormones of pregnancy affecting you!

Sleep apnea can also cause headaches. If you’re experiencing headaches each morning, definitely talk to your doctor.

Is Sleep Apnea During Pregnancy Dangerous?

Since sleep apnea stops air from flowing into your lungs, it also reduces your blood-oxygen levels over time. This puts you at risk of developing some serious health conditions, some of which can affect your baby and seriously affect your life.

Gestational diabetes and high blood pressure and other hypertensive disorders are very dangerous for a fetus and expecting mother. These conditions can contribute to a higher risk of pregnancy complications, preterm labor and delivery problems.

Researchers also found that pregnant women with obstructive sleep apnea had an increased risk of having a Cesarean delivery. Their babies more often required stays in the neonatal intensive care unit, typically for breathing problems.

Treating obstructive sleep apnea and sleep problems during pregnancy can help improve pregnancy outcomes and overall health for both mom and baby, as complications caused by sleep apnea can affect birth weight and infant development.

Untreated sleep apnea can also cause diabetes, heart problems such as heart attack and stroke, and Type 2 diabetes.

If you’re overweight or obese or have a high BMI (body-mass index) before pregnancy, you have a higher risk of sleep apnea or sleep-disordered breathing because the weight on your neck can cause your airway to collapse. Gaining 20 pounds or more pounds during pregnancy when you are obese increases your risk of developing sleep apnea, and if you’re at a healthy weight before getting pregnant and you gain more than 35 pounds, you also increase your risk.

Gestational diabetes is also a risk factor for sleep apnea. Some women struggle with sinus and nasal congestion during pregnancy because higher estrogen levels can increase swelling in the mucus membranes of the nose, which can make breathing difficult during the day and even more difficult at night.

Other risk factors for sleep-disordered breathing include:

How Is Obstructive Sleep Apnea Treated in Pregnant Women?

As you probably know, many things change during pregnancy, and that could include how you are treated for your obstructive sleep apnea. In most cases, treatment for mild forms of the sleep breathing condition begins with lifestyle changes, such as changing your sleep position. We recommend that you sleep on your side and not your back to help minimize your airway obstructions.

If you are obese or overweight pre-pregnancy, we recommend that you work with your doctor to maintain a healthy weight during pregnancy, as sleep apnea can develop or become worse due to weight gain.

We also recommend that you try adhesive breathing strips to help open up your nostrils if you have a sleep breathing disorder. Some women experience severe nasal congestion due to their pregnancy, but some decongestants are off-limits to moms-to-be. You can try a saline spray or nasal rinse instead (just ask your doctor first to be sure it’s safe for use during pregnancy).

If your sleep apnea persists or is severe, it is critical that you find out about your treatment options. You may need to wear a CPAP machine. CPAP (continuous positive airway pressure) devices help keep the airway open by sending a constant air stream into the nose. This air helps to keep the airway open and keep you breathing during sleep.

While the continuous positive airway pressure machines work for some individuals, others find the CPAP machine uncomfortable and loud.

If you cannot tolerate a CPAP machine, you may find relief for your sleep-disordered breathing problem and reduce the risk of pregnancy complications with oral appliance therapy.

These oral appliances, also known as mandibular advancement devices, are custom-fit to you and help keep your airway open and your tongue from falling back and blocking airflow.

Are you a pregnant woman and experiencing sleep problems or suspect you have sleep-disordered breathing? Do you have questions about sleep apnea? Call us at 305-595-4616 today to discuss your sleep apnea treatment options and find out if you need a sleep study!

Miami and Coral Gables, FL Obstructed sleep apnea is classified as a blocked airway, which directly …

Did you know that obstructive sleep apnea can negatively impact every system in your body? From your…