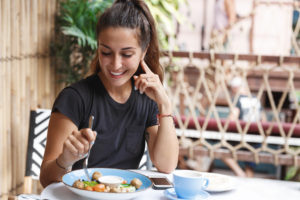 When it comes to your mouth, there’s some confusing terminology floating around, such as the term “oral microbiome.” While it may sound complicated, your oral microbiome is just the colonies of microscopic organisms living in your mouth. Some of them are good bacteria, and some of them are bad. Good bacteria can help your body stay in balance and help keep your teeth clean. These bacteria can even be added to your food to help everything from your digestion to your gums. Sometimes these helpful bacteria come in the form of something called “probiotics.”

But while good bacteria help our mouths and bodies, bad bacteria have been found to cause a lot of danger to both. Bad bacteria can not only cause cavities and gum disease, but they can also get into your bloodstream and may even contribute to Alzheimer’s disease, heart disease, stroke and more.

For starters, researchers found that among families, the oral bacteria seemed to be similar in both levels and types of bacteria. This is likely due to family members having similar diets. They also found that children had different oral bacteria from adults, also likely due to their diets, as we all probably know children aren’t always the most adventurous eaters.

Another interesting discovery by the Colorado State University team was that people who didn’t visit the dentist regularly had more Treponema, a pathogen known to cause periodontal (gum) disease. The researchers believe this pathogen is more prevalent in those who do not visit the dentist because it could be lurking in the tartar along the gumline, and those who do not get this cleared away regularly clearly have more of it in their mouths.

The researchers also found that those who claimed to not floss also had more bad bacteria present in their mouths than those who did floss regularly, even among people who brushed regularly!

Ultimately, the study shed some interesting light on oral microbiomes, but it also highlighted some things we already knew: the importance of flossing and having regular dental cleanings.

Protect the Mouth from Medication Side Effects

As we age, it is common to require medications to help keep our bodies performing at optimal levels.…

When you think about good and bad things for your health, you can immediately list foods and behavio…

Miami and Coral Gables, FL  What if you could rejuvenate your gums during your lunch break? A n…