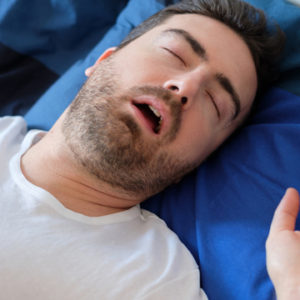 Obstructed sleep apnea is classified as a blocked airway, which directly results in loud snoring. If you snore, your partner has probably told you so, but you may not think it’s that big of a deal. Our sleep apnea dentists at Miami Designer Smiles are here to tell you that untreated sleep apnea presents a serious threat to your health. Today we are going to share the dangers of untreated sleep apnea. We hope that you consider getting a sleep apnea screening in Coral Gables today if you are dealing with this sleep-breathing disorder.

Sleep apnea is a sleep-breathing disorder that involves a narrow or restricted airway that impedes airflow. The result often is loud snoring due to the vibrations of soft tissue as air seeps by. It may not sound like a big deal, after all, you probably aren’t even aware that you snore, but there are serious health dangers to ignoring it.

When you have untreated sleep apnea, you deprive your body of oxygen. Even though you don’t realize it or feel a difference, your body is suffering just as much as it would if you deprived it of water or food for a prolonged period. Starving your body of oxygen increases your risk of heart disease, stroke, and diabetes. Some studies even link cognitive decline and Alzheimer’s disease to untreated sleep apnea.

Just think, you would never go without food or water for too long, so why would you starve your body of air? The best way to safeguard yourself against the dangerous health effects of sleep apnea is to receive a screening if you exhibit any of the symptoms associated with this sleep breathing disorder.

Sleep apnea can occur in anyone of any age, even children or athletes. Signs of sleep apnea in adults may include snoring while sleeping, daytime fatigue, memory loss, mood swings, and loss of libido. In children, ADHD-like symptoms are often one of the most significant signs of untreated sleep apnea. Children also can get a sleep apnea screening from their Miami dentists at Miami Designer Smiles.

One of the most common sleep apnea treatments is the use of a Continuous Positive Airway Pressure machine known as a CPAP, which has a mask that you wear over your face as it forces air into your lungs while asleep. While the CPAP is effective, it’s often cumbersome and annoying because of the loud noise it emits while running. Plus, the CPAP can be inconvenient when traveling. Many CPAP users discontinue using their machine within months of beginning treatment, which means their sleep apnea isn’t being treated properly!

At Miami Designer Smiles, we use custom-made oral appliances that can help open the airway when worn, allowing better airflow while sleeping. Our custom mouthpieces are comfortable, yet effective to wear all night. Plus, they are convenient to take when traveling, aren’t noisy, and do not require any plugs! Treatment sleep apnea can be simple with our method.

If you would like to learn more about sleep apnea, its treatment or to schedule a screening, just call Miami Designer Smiles at (305) 595-4616. We welcome patients of Coral Gables and Miami.

Why Diagnosing TMJ Disorder can be such a Challenge

4 Habits that could be Wrecking your Smile

Not getting a lot of sleep while you’re pregnant? You’re not alone — many moms-to-be str…

Miami and Coral Gables, FL Are you always feeling tired? Do you seem to be getting sick often, or ju…